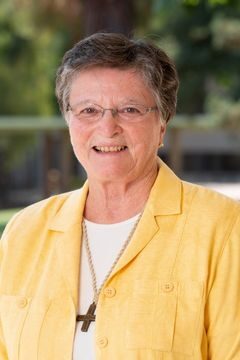 For teenager Nancy O'Shea, Notre Dame San Jose teachers like ebullient Sister Helen Cecilia Miller (who died at 101 years of age) pointed the way to a good life: "I had thought about religious life for a long time and the Sisters of Notre Dame were so happy," she says. "I was attracted to that. In the end, it wasn't a hard decision to enter."

As a young Sister, Nancy (then Sister Anne Jerome) started her teaching career at St. Vincent de Paul School in Federal Way, Wash. She would continue as a teacher and principal for 15 years in schools throughout California and Washington. Later her administrative gifts and management skills were used on two different occasions as a member of the California Province Leadership Team.

The 12 years she spent as Pastoral Associate at St. Patrick Parish in Sonora, Calif. were a very positive experience. She taught adult RCIA classes and prepared and supported Eucharistic Ministers to the Sick. She was the only Sister in Tuolumne County and was honored to be asked to be the chaplain to Hospice of the Sierra, where she met with anyone who wished to talk about life/death issues but didn’t have their own clergy person. She never knew what situation she was walking into and soon learned to depend on the wisdom and grace of God! She also facilitated a support group for parents who had lost a child of any age. She states, “Really what I did was enable them to minister to one another. In the midst of their own terrible pain, they always reached out to another member of the group, especially a new member whose pain was so raw. It was truly inspiring to witness such compassion. The pastoral team members with whom I worked were dedicated and collaborative, and it really was a supportive and energizing time in my life.”

In 2008, Nancy was elected to serve as one of five members of the Congregational Leadership Team of the Sisters of Notre Dame de Namur, based in Rome. During the six year term, she visited each unit in the Congregation which included 17 countries on five continents. The team’s role was to ensure the unity and foster the mission of the Congregation. It was a challenging and blessed time.
During her ministry service, she was able to meet Sisters throughout the world and witness the ministries they were giving themselves to, often in very harsh circumstances. To see the charism and spirit of St. Julie alive and well, embedded in such different cultures and languages, was so inspiring and reassuring: “I think St. Julie herself must be so amazed and would respond, as she so often did, ‘How good is the good God!’ ”

Twice during those years, she was able to spend two full months with nearly 20 young Sisters from throughout the congregation who were preparing to make their final vows. They were really able to come to know one another well and had such rich sharing of experiences that helped them better understand each other’s reality. She found that experience resulted in a more global way of thinking that affects her to this day.

Since returning from Rome, she has taken a two-year course to prepare to offer spiritual accompaniment to those who are seeking to deepen their relationship with God. She is finding it to be very rewarding.

“I am especially grateful for the gift of this vocation to religious life, and to the Sisters of Notre Dame in particular. St Julie’s spirit and admonition to make known the Goodness of God, and help people see God’s goodness in their lives, has offered me a fruitful and meaningful way to live out my own life over these past sixty years.”