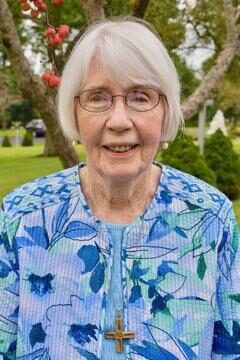 Patricia Curran was born in Boston, Mass. and is the only daughter among J. Stanley and Mary (Riley) Curran’s four children. She first met her father on the day he came home from the war in 1944. A veteran’s loan allowed the family to buy a new house where her parents lived until their 64th wedding anniversary. Her father was a teacher in the Boston Public Schools, which Patricia attended for 12 years.

Patricia enrolled at Emmanuel College in Boston and met Sister Angela Elizabeth, the dean of the College. Sister was gracious, loved by all students and the ideal Patricia wanted to imitate. By the end of her freshman year, Patricia had decided to join the congregation but waited until she had graduated from college. She and 60 other postulants entered the Congregation at Ipswich, Mass. in 1962. Patricia chose to take the name Sister David St. Anne—the same name that her paternal aunt, who was an SNDdeN, had until her early death.

When the time came to renew her first vows, Vatican II changes were beginning to take effect, and Sister Patricia was told that they could experiment with liturgy for the event. She asked herself what the most joyful thing she could do was and thought, “Dance!” She’d had some basic dance training as a child, but this novel experience of dancing at a liturgy (as she was reluctantly given permission to do) set a new direction for her that was to take her around the world.

Sister Patricia was an educator in Notre Dame schools for many years, with her longest service at Cardinal Cushing Central High School for Girls (CCCH) in South Boston, Mass. She was there during the height of the busing controversy during the 1970s, a time when even within the school there was racial tension between students.

With the support of then-CCCH Principal Janice Waters, SNDdeN, Sister Patricia and some students developed a liturgical dance class as a religion option, using steps and moves to religious music that was used in Catholic churches. It was healing for the CCCH community to have Black and White students participate in the class together and dance before the whole school.

In 1979, Sister Patricia founded the Credo Liturgical Dance Company of Boston. She describes it as her “driving energy force and occupation for a number of years,” though it was never a formal ministry to which she was assigned. After leaving CCCH, Sister advocated for liturgical dance to have broader reach within Catholic churches, but neither the local bishop nor the Vatican were supportive. Nonetheless, Sister has given many workshops on liturgical dance in the United States, Canada, Kenya and Australia.
Sister is the author of “Grace before Meals: Food Ritual and Body Discipline in Convent Culture,” published in 1989. It describes pre-Vatican II practices among two Congregations of women religious.

Sister Patricia spent 20 years serving at Project Hope Boston which partners with women and families to improve their housing stability and economic mobility. After retiring from Project Hope, Sister volunteered to teach a course called Emotional Awareness to men who were incarcerated. This volunteer activity, along with liturgical dance, became the most important ministries to her heart.

Based on the book “Houses of Healing: A Prisoner's Guide to Inner Power and Freedom” by Robin Casarjian, the course took the men through the process of forgiving those who traumatized them as children, forgiving themselves and asking forgiveness from those whom they had harmed. Sister taught the course for seven years and found it very healing for the men, who were victims of very bad circumstances.

Though she no longer dances, Sister Patricia now expresses herself artistically through drawing and watercolor painting.

On the occasion of her 60th Jubilee as a Sister of Notre Dame de Namur, Sister Patricia wrote: "I have responded to the Missioning Call by teaching at Cardinal Cushing High, serving the homeless at Project Hope, and by dancing before the Lord."

“I am grateful to Notre Dame” she says, “for giving me the freedom and support to pursue whatever I felt to be God’s Call.”

To make a gift to the Sisters in honor of Sister Patricia's Jubilee, please click here.