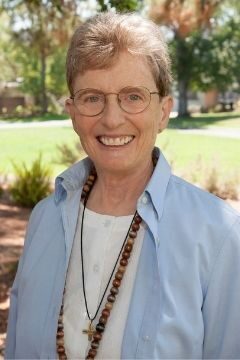 The eldest of five, Phyllis D'Anna, SNDdeN, enjoyed a lively home life with “a sweet and kind mother and a musical dad who loved gathering people together.”

For a time, the family lived in Alabama and it was there that a Sister told Phyllis’s mom, “Phyllis is going to become a Sister.”

An avowed class cutup, Sister Phyllis laughed at this idea and said, “She’s GOT to be kidding!”

Later, the family moved back to her hometown of San Jose, CA. and Sister Phyllis attended Notre Dame High School. Influenced by the Sisters who taught there, Sister Phylliis realized that she, too, wanted to serve and make a difference in the world.

She entered the SNDdeNs and became Sister Philip Marie.

Her first assignment brought her to Sacred Heart School in Salinas, CA, where as a brand new teacher she was happy to receive advice and help from more experienced teachers like Sister Bernadette Garcia.

In the early ‘70s, Sister "Phil" taught at Mother of Sorrows School in Los Angeles. Though the Watts riots were over, it remained a turbulent time. It was not unusual to hear gunshots or see SWAT teams in the neighborhood.

One day Sister remembers leading her first-grade class down the street and a police helicopter overhead booming, “Get up against the wall.”  Within seconds, her little ones were nervously clinging to the brick wall. But it didn’t take long to realize that the command was not meant for them!

Later, Sister Phillis became certified in Montessori and taught at both the Early Learning Center in Belmont, CA and at Creative Montessori in East Palo Alto, CA.

In the late ‘80s and as part of her spiritual quest, Sister Phillis helped build and staff a Zen Monastery and Interfaith Peace Center. She organized and directed retreats and became adept at carpentry and plumbing.

Friend Cameron Sellar shares, “I met Sister Phil at a retreat center over 20 years ago. Through her gentle love and acceptance of all, she quietly lives her religion, rather than talking about it, and in doing so, she makes known God’s goodness.”

Sister Phillis has a wonderful connection with the elderly, and worked with infirm Sisters at both the Notre Dame Villa and the Mercy Retirement Center in Oakland.

Sister Phil also served as the administrative assistant for the Provincial Leadership Team, and she would zoom up to work on her carbon-free electric scooter (caring for the earth is of key importance).

She currently serves as one of two coordinators for the Sisters in the West region of the U.S. East-West Province. She also provides spiritual direction, teaches meditation-awareness practices, and volunteers at a women's jail.

As Sister Phyllis looks back on 60 years as a Sister of Notre Dame, she says, “My whole life has been an energizing and renewing experience. I try to live each moment in the present and each day to the fullest. And I am grateful for every part of my life…for all the children I have taught and my Sisters, Sangha, family, co-workers and friends and all who have blessed my life in countless ways.”