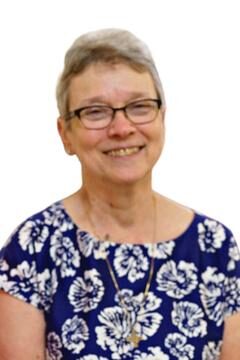 Sister Roberta was born in Massachusetts but spent her elementary school years in her father’s hometown of Shenandoah, Pa. She was an only child until age 10 when she welcomed a baby sister.

Roberta came from a loving family that enjoyed doing activities together. Her mother taught her how to cook, embroider and knit. Her father taught her the names and uses of various tools, how to paint and which mushrooms were edible. “In the fall picking mushrooms in the woods is among my fond memories,” she says. The family is of Polish descent and observed various customs, especially around the holidays. Those mushrooms she picked with her dad would be dried to preserve them for the special holiday recipes.

It's not surprising that Roberta later became a teacher: “I liked being in school plays and had my first speaking role in grade six,” she recalls. “I was active in Brownies and later Girl Scouts. I liked learning and was an honor student.”

Sadly, her father became ill and died when Roberta was 12 and in eighth grade. After finishing the school year and graduating, she and her mother and sister returned to her mother’s hometown of Salem, Mass. She enrolled at St. Mary High School in Beverly, Mass., where she was involved in many activities, including the school newspaper, student council, cheerleading, sodality and drama. She continued to be successful academically and was a member of the National Honor Society.

Though she’d attended a parish elementary school run by Sisters of another congregation, Roberta’s first exposure to the SNDdeNs came at St. Mary’s. “Having just recently moved to Massachusetts after my father's death,” she relates, “two Sisters were particularly kind to me. Even at that young age, I had an attraction to religious life. Gradually I learned about St. Julie Billiart, and after reading a book about her life, “As Gold in the Furnace,” I was drawn to consider more deeply the SNDdeN. Julie's love of God, her stamina and resilience in the face of difficulties and fearlessness in carrying out God's plan for her even when confronting a bishop's authority, inspired me.” Roberta joined the congregation following her high school graduation in 1962 and went on to earn a bachelor's degree in Russian from Emmanuel College.

Sister Roberta taught at the middle grade and high school levels in West Newton, Woburn and Peabody, Mass. before moving to Japan to teach English at an SNDdeN girls high school there. She has a certificate in Japanese Language.

After returning to the U.S., she was active in spiritual and religious education in the Boston Archdiocese and in parishes as a Pastoral Associate for more than 30 years. Her master’s degree in Christian Spirituality from Creighton University and training as a Stephen Minister served her well during this time. She currently serves as a Support Coordinator, assisting Sisters in the Northeast Region of the U.S. East-West Province with their needs.

When asked about which ministry has meant the most to her over her 60 years as a Sister, Sister Roberta can’t choose one, though she did describe her ministry in Japan as probably the most broadening experience. “Each ministry had its particular joys, challenges, treasured moments and learnings,” she says.

Reflecting on this time of Jubilee, Sister states, “I have been very blessed by a faithful God throughout my life and I am grateful for all the opportunities and experiences that shaped and continue to shape the person I am.”

To make a gift to the Sisters in honor of Sister Roberta's Jubilee, please click here.