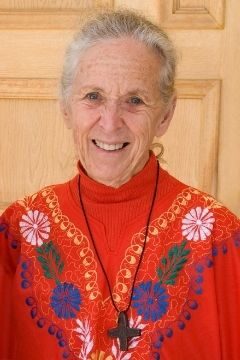 Volunteering in high school with children with cerebral palsy led Sandy Price to consider a religious vocation. She remembers that, despite the excellent physical therapy the children received, she saw a tremendous need for spiritual values to sustain them through life. “I thought of religious life as a way of helping people realize their value regardless of disability. Teaching values through education seemed a way to go.”

Religious life was in a time of major change when Sandy entered Notre Dame in the ’60s and was given the name Sister Edwin Marie. She was pleased to hear an older Sister predict that in 15 years there would be no habit. “Good,” she thought. “this is not for life.” More importantly, the change from semi-cloistered life after Vatican II opened new ways to witness to Gospel values.

Her easy grasp of the Spanish language led her to ministry among the Spanish-speaking, which held an attraction for her. Besides learning the Montessori Method, and teaching primary grades, she became involved in local issues of justice—racial integration, fair housing and support for the United Farm Workers movement.

Participating in a course on Christian Base Communities given by a team from Brazil was a moment of life-changing grace for her. With this team she visited Panama, Colombia, Chile, and Peru, learning about liberation theology along the way. Back in San Jose, Calif., she became a recruiter for the War on Poverty pre-school program in the Alum Rock school district and collaborated with Rev. Tony McGuire, Rev. Richard Garcia of the Diocese of San Jose, and other women religious at Centro Pastoral, an organization serving the San Jose Hispanic community.

One friend from that time, Consuela Sanchez, remembers: “We all loved her. Sister Sandy has the spirit of an apostle, working where there is great need. It was an inspiration for me and my husband to see her dedication to us and her ways of nurturing our spiritual growth through study of the Word of God. We chose Sister Sandy as godmother for one of my daughters at her First Communion.”

Another friend, Maria Licea, said, “God sent me an angel who invited me to participate in catechism classes for the neighborhood children. Sister Sandra taught us to take part in assisting those who need help. She was blind to race, color or sex. In these times we desperately need many Sister Sandras!”

Sister Sandy loves music. One of her favorite memories from those years in San Jose was participating in the Sisters’ Chorale, with other SNDdeNs who went on tour locally. “I loved our practices. The joy of being together. The magic of music with Sister Paula Butier’s ‘tune-up’ and Sister Emilia Rodriguez’ joyous enthusiasm as choir director. We sang at the 25th anniversary of the U.N. in San Francisco as part of a 2000-voice choir—a moment of eternity in time—so many faith traditions, one God, singing as one voice!”

Sister calls her mission to Nicaragua an unexpected blessing. She was chosen by leadership to start a mission there, in part, because of her fluency in Spanish. Decades later she described her ministry in Nicaragua as “forever new and a daily blessing.”

In the difficult years of continuing war in Nicaragua, she says that she simply accompanied communities in their suffering and their hopes. There were almost no schools in the mountains because teachers were targets of the Contra army. She said, “We began in 1990 with 20 home schools. Parents who had learned to read taught their children and others close by. We also began intensive primary classes for parent-teachers. Most had only a third-grade education. No one had reached sixth grade.”At the end of the war of 80's the parents and Sister Sandra with the help of small donations from many people converted tiny home schools into wooden one-room primary schools and little by little the home schools became formal primary schools. The government began to send teachers into the mountains and the schools are now part of the national education system. Today alongside the government schools there are more than 60 parent-initiated and -built, or restored, schools.

Later she helped raise funds and organize the local people to build basic schools in the mountains. Sandy helped start programs for handicapped children and adult literacy; she worked with the mountain “doctors” and set up monthly training sessions for them. “Their work and dedication is admirable and many, many lives have been saved through their efforts,” she said.

Another major part of her ministry and a reason she continues in the east coast of Nicaragua even when the other SNDdeNs were working in the western side of the country, was accompanying a small, newly formed religious congregation of native campesina women. Living with them since 1982, she helped them learn about religious life, vows, and ministry. Initially, none of the Sisters had finished their sixth grade of primary school. Today, many of the Misioneras de Cristo have completed their studies in local universities and are recognized and appreciated by the Bishop and all of the rural communities in the region.

In all she has done, Sister Sandy describes her role as mostly that of a catalyst. “I am just part of a much bigger picture. All of the work is carried out with many other people and groups.”