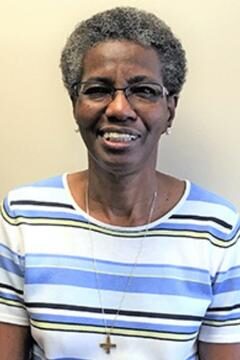 Patty Chappell, SNDdeN, is a native of New Haven, Conn.

Sister Patricia earned an undergraduate degree in psychology and social work, then a master's from Catholic University of America's National Catholic School of Social Service in Washington, D.C.

After years as a community organizer, Sister Patricia entered the Sisters of Notre Dame de Namur in 1977.

Sister Patty has worked for decades in nonviolence and anti-racism work. She was the full-time president of the National Black Sisters’ Conference from 1996-2001 and is a former member of the Board of Trustees for Trinity University in Washington, D.C.

For nine years, she served as Executive Director of Pax Christi USA.

She currently serves as the moderator of the Leadership Team for the Sisters of Notre Dame de Namur U.S. East-West Province.

Click here to read a profile of Sister Patty published when the Leadership Conference of Women Religious named her the recipient of the LCWR Outstanding Leadership Award.