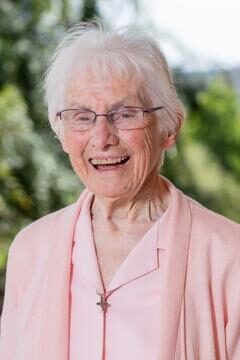 While a junior at Notre Dame High School, San Francisco, Aileen Marie Bermingham, SNDdeN, and a good friend volunteered at a day-care center run by the Holy Family Sisters.

"I'm not sure how much we helped," she recalls. "I think we did it for the peanut butter sandwiches."

But later, her friend decided to join the Holy Family Sisters and Sister Aileen realized she felt drawn to the Sisters of Notre Dame de Namur.

Two months after high school graduation, Sister Aileen moved into the SNDdeN novitiate in Saratoga, Calif. As the oldest of six children from a large and loving family, she remembered being homesick and appreciating the down-to-earth novice director.

As a young, brand-new teacher in 1952, Sister Aileen fell in love with her fifth-grade class at Moreland Notre Dame School in Watsonville, Calif.

"They were wonderful children," says Sister Aileen. "I still remember all their names."

Over time, Sister Aileen attended the then-College of Notre Dame and the University of San Francisco, earning a master's degree in English.

In 1974, a phone call from Rome caused the biggest surprise of her career.

Sister Aileen had been chosen as the Provincial Superior for the then-California Province. In this role she said, "I was able to see the Sisters' goodness first hand."

One of her most fulfilling ministries was working with the elderly. For 10 years, Sister Aileen worked at the John XXIII Center in San Jose (part of Catholic Charities of Santa Clara County) which provided meals, counseling and outreach to senior citizens in the local community who needed a helping hand.

Today Sister Aileen has a busy life at the Sisters' Province Center in Belmont, Calif. She frequently accompanies other retired Sisters to medical appointments and emergency hospital visits. As a former English teacher, she is also called upon to help keep our communications' grammar perfect!