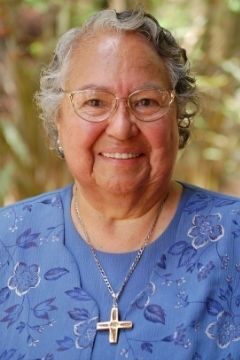 "For many years now, I have been privileged to work with and help others who are poor. I am very grateful to Sister Mary Angelica and many others who encouraged me along the way."

As a young girl, Avelina Garcia remembers seeing people, both in her family and at church, who expressed their faith with great devotion. "My grandmother just lived by her faith and showed me God’s faith working in her and this was something she inculcated in me," she says. Early on, she began to consider becoming a Sister.

Avelina attended Notre Dame High School in San Jose, Calif., where she helped pay her tuition by sweeping and dusting the art teacher's classroom. Sister Mary Angelica liked this young, hardworking girl and asked if she would like to become a Sister. "Yes, but first I want to graduate from high school," replied Avelina without hesitation. Sister Angelica died in March 1949, and Avelina entered the novitiate that August—after graduating from high school, of course. Sister Avelina says, "I claim Sr. Mary Angelica saw me enter from her place in heaven."

For years, Sister Avelina—then known as Sister Guadalupe Julie—faithfully served as cook, housekeeper and assistant nurse in the large SNDdeN communities. Then came a life-changing phone call from Father Albert Zabala, S.J. who informed her that she had received a scholarship to the University of San Francisco. In three years, she graduated with a bachelor's in theology and continued on to complete a master's degree in religious education.

The education Sr. Avelina received has been shared with many others. She has served as religious education coordinator, often with Spanish-speaking workers. Her ministries have taken from rural to urban locations across California.

In later years, Sister lived at Moreland Notre Dame Convent in Watsonville where she coordinated the confirmation program for St. Patrick's Parish and volunteered in prison ministry at the Santa Cruz County Detention Facility.

She now resides at Mercy Retirement & Care Center (MRCC) in Oakland where she enjoys taking art classes. “Her open heart is as beautiful as the art she creates, and watching her at work is truly inspiring,” says Stella Reece, who serves as Life Enrichment Coordinator at MRCC.

Service to the Sisters:

…From 2½ pounds to a stately, solid woman
of 70 years professed!

A time of struggle-life’s abundance had not yet arrived…

But then a wise priest saw gifts others did not…
and he gave her a scholarship to USF!
What a blessing!
Seen and unseen gifts merged…

Now in her later years spent at MRCC her loving kindness
and warmth shone and culminated
in being surrounded by her gifts to others
and their love for her.

To make a gift to the Sisters of Notre Dame de Namur in honor of Sister Avelina, please click here.