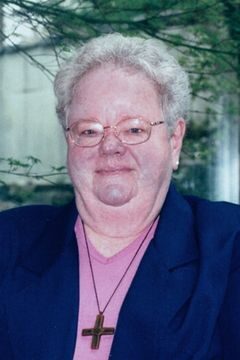 Sister Carol was born in Chicago, Illinois on December 25th, 1936, to Francis Joseph and Mary Veronica Connor and is the sister of the late Mary Frances Ries, Francis Joseph Connor, Jr., John Leo (Jack) Connor, and Therese (Tess) Bredice. She is survived by her loving sisters, Veronica (Bonnie) Connor, Sr. Margaret Connor, SNDdeN, Rita Jakub and brother Stephen Connor as well as her many nieces, nephews, grandnieces and grandnephews.

During her 67 years in religious life, Sister Carol devoted her life to bringing a gentle and gracious presence to those she ministered to in education as teacher, Pastoral Associate, Parish Christian Formation, parish liturgy and religious education, parish administrator, and social ministry. Sister also served as Administrative Assistant and Communications Supervisor at St. Luke’s Institute.

A Mass of Christian burial was offered on Tuesday, October 19th at Our Lady of Victory Church followed by private interment at the Sisters of Notre Dame de Namur’s cemetery at Ilchester, Maryland.

Sister Carol Connor, born on Christmas day, was blessed with joy and knew how to spread it. In Notre Dame she taught in elementary and high schools from New York to Virginia. In Norfolk, Virginia her engagement in Religious Education led to an invitation from her former pastor to work with him in his new parish, St. Gerard in Roanoke, Virginia. As the Pastoral Associate of St. Gerard Church, Carol served the small African American community in every aspect of parish life. She gave priority to “developing among the people of God the leadership that is within them, so they may take ownership of and responsibility for the Church of God on earth.”

During this time, Carol kept herself professionally prepared by studying Theology and pursuing graduate degrees in Counseling and Guidance. After twenty-eight years of engagement in teaching and pastoral ministries, Carol was ready for a rest. Instead, St. Luke Institute pursued her to help their fledgling ministry. St. Luke’s started as a psychiatric hospital for alcohol and substance dependency and grew to provide a wide range of services for people with psychological and spiritual problems. Carol grew with it, beginning her ministry there as the Medical Records Supervisor, then the front desk greeter, and ending as their Communications Supervisor.

At St. Luke’s, Carol felt at home, using her natural gifts: “I like people and I like to laugh with them. I really enjoy what I am doing.” She was once quoted as saying, “As I get older, I am more and more happy to be a Sister of Notre Dame de Namur, trying every day to proclaim God’s goodness as a daughter of Julie.”

Several hundred SND’s were gathered at Trinity College for a gathering of some kind – perhaps the famous Thanksgiving meeting that occurred for several years in the 60’s or 70’s. We were in chapel. A Sister was at the podium presenting a reflection near the end of Mass. Her comments were thoughtful and faith filled and were spoken with conviction. It was Sister Carol Connor – once known as Sr. Francis Veronica – an SND I had never laid eyes on before. Exactly what she said, I don’t remember, but I know I was very touched by her words.

Indeed, Carol was a faith-filled woman. And so it is not surprising that the one phrase she hoped would appear at her funeral is this: “I know the One in whom I have believed.” This was the only suggestion we could get from her regarding preferences for the final celebration of her life.

These words attributed to St. Paul sustained Carol’s faith and joy, in the midst of her many challenges, both physical and emotional, over the years. From 2 Timothy, Chapter 1, vs. 12 the complete text reads:

For this reason, I also suffer these things, for I know the one in whom I have believed. But I am not confounded and I am certain that he has the power to preserve what was entrusted to me, unto that day.

Carol was a woman without guile. She was always so frank and honest. There was nothing false or deceitful about her.

There was never any doubt as to what Carol thought about something…she just said it right out. And then if she realized she was all wrong, or another way of looking at something was pointed out to her, she could laugh at herself…even a lot! She could make fun of her tendency to think her way was the right way. At Mount Notre Dame, she found the different approach the nurses took in caring for her to be quite challenging. Not that they were doing anything wrong – it just wasn’t the way she wanted it done, or thought it should be done – and after lamenting it with a listener, she would laugh at her own desire to be in charge.

Although she started out on the very wrong foot with the SND Administrator and really didn’t like her or her methods, Carol was open enough to recognize goodness and empathy and did a complete turnaround. How she missed Sister Donna when she moved on to another ministry.

Carol was fun loving. She liked being among people and was ready to take on new activities – even ice-skating in her 60’s! She liked the hustle and bustle of crowds. Once on an October vacation at Long Beach Island with a rather quiet group of friends, she burst out one day with: “This is like a damn retreat!” Vacation at the beach for her meant walking a busy boardwalk and with lots of activity going on.

Maintaining a positive attitude was important to Carol and even in the midst of loneliness and pain she tried to focus on what was positive in her life. And she liked to celebrate the seasons! Be it St. Patrick’s Day, Easter, Halloween or Christmas – Carol had the decorations to mark the occasion – even when it was only one room that she could so festoon. And you could say she liked to decorate herself – she was always dressed attractively and appropriately for the occasion – and almost always carrying a Vera Bradley purse with matching wallet!

Given her baptismal name, it is not surprising that Carol was born on Christmas Day in 1936, to Francis and Mary Connor, the first of what would be nine children. She loved her family and spoke often of them with gratitude or loving concern.

Carol met the Sisters of Notre Dame de Namur even before she attended the Academy of Notre Dame on K Street since she had an aunt in the community. Along with the still living members of her Band- Sisters Benedicta Chang, Mary Ann Cook, and Regina Pellegrini, Carol began her religious life on August 15, 1954 at Ilchester, Md.

For almost 20 years she taught in elementary and secondary school settings, many of those years as the religion teacher. Moving on to Pastoral Work which she loved, also put her up against some extremely difficult situations with pastors that devastated her. So, following the advice of the then provincial, Rosalie Murphy, and despite her desire for pastoral work, Carol used her organizing and secretarial skills, as well as her good PR, at a local business while living at Ilchester, Md.

The happiest and most fulfilling ministry for Carol was the 27 years she spent at St. Luke Institute in Silver Spring, a treatment facility for clergy and religious. As Administrative Assistant or Communications Supervisor, Carol especially loved greeting new residents and visitors, welcoming them with joy and with respect.

The years since Carol’s retirement in 2012 until her death on September 30, 2021 were marked by many losses – of her home, of physical strength, of independence, of loved family members, of easy communication with friends. Her faith, her honesty, her determination to be positive, as well as her stubbornness and desire to be in charge–continued to mark those years.

Carol, we love you, we will miss you, and we rejoice that you now know in a new way “the One in whom you have believed.”