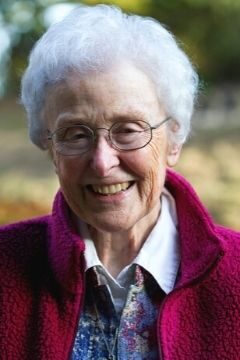 Although Carole’s father was opposed to religion, her mother was sure that that if her daughters went to Catholic schools, they would get a great education. Convinced by this argument, Mr. Proctor acquiesced and let Carole and her sister attend Notre Dame de Namur schools.

After graduating from Notre Dame High School, Belmont, Carole enjoyed a year of college and a year of working at General Electric before deciding to enter the convent. Initially, her parents were not happy with this news and Carole had to drive herself to the convent. A Sister who saw her alight from her car took one look at Carole’s pink suit and bleached blonde hair, and commented, “This one won’t stay!”

But stay she did!

For nine years she counseled parishioners at Holy Family Parish in San Jose. Ready for a change, a film on Africa piqued her interest and led her to serve in Kenya for 13 years. She especially appreciated the welcoming, loving spirit of those she met there. Sister helped in the religious formation of young Kenyan Sisters, provided counseling, and taught young Kenyans to be counselors. She also helped serve as a foster mother for four children whose mother had died.

When walking in the rural areas became more difficult, Sister Carole made the hard decision to come back stateside. For years, she volunteered several days a week for the St. Vincent de Paul Society in East Palo Alto, Calif. She now resides with other Sisters at the Mercy Retirement & Care Center in Oakland.

When celebrating 60 years as an SNDdeN, she remarked with a smile, “Life has been good to me.”