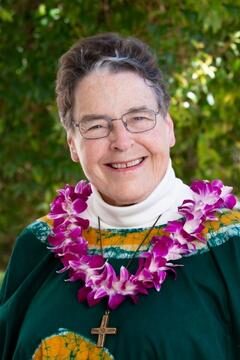 It is no surprise that Sister Joan Burke, SNDdeN, speaks of the globe as “my village.”

Sister Joan has worked in different parts of Africa (Democratic Republic of Congo, Nigeria, and Kenya) for most of her decades as an SNDdeN.

Where she has been and what she has done is quite incredible.

It all began in a very Catholic family in Millbrae, Calif., where Joan was the youngest of four daughters. From her early years, she felt affinity with the story of St. Julie Billiart and Francoise Blin de Bourdon—the SNDdeN co-foundresses—and their experience of founding the congregation in France and Belgium during the French Revolution.

This stayed with Sister Joan even throughout her student days at Mercy High School in Burlingame, Calif. She always speaks with appreciation for her four years there.

She also gained a graduate degree in library science from the University of California at Berkeley.

In a way, Sister Joan has been “on the road” since her mid-twenties when she was named the congregation Mission Secretary, based in Rome, and visited our ministries on five continents.

Sister Joan became fascinated with the interplay of the Gospel and culture, which led to intensive study and three degrees from Oxford University in social anthropology.

During close to 20 years in Africa, Sister Joan was engaged in understanding the religious life among African women. This interest culminated in a book she wrote, titled “Towards the Inculturation of Religious Life in Africa: A Case Study and Reflection Guide.”

After many years of living and working in Africa, Sister Joan served eight years as Notre Dame de Namur NGO Representative at the United Nations. There she learned of the International Movement Fourth World, which is dedicated to people living in deep poverty and accompanying them in their struggles to realize their aspirations.

Sister Joan lived with the group for a year in Noissy-Le-Grand about 30 miles from Paris. Their focus on the impact of the social exclusion of persons living in poverty marked her deeply.

On the home front, many will neither remember—nor even imagine—that for one brief year of transition (1976) Sister Joan served as the coordinator of school lunch programs for the Archdiocese of San Francisco. In his later years, Bishop Pierre DuMaine enjoyed recalling that he met her when she was a “milk maid!”

Most recently, Sister Joan served in adult education at Tangaza University College in Nairobi and as a member of the Kenya Provincial Leadership Team. She was also part of a Team that developed a leadership-training program for women congregational leaders in East Africa.

Sister Joan returned to the U.S. from Africa in August 2020, and is now one of the SNDdeN U.S. East-West Province coordinators for a 7-year sustainability project that originated with Pope Francis' Laudato Si'.

Click below to watch a short video of Sister Joan speaking in 2018 about her life in Kenya.