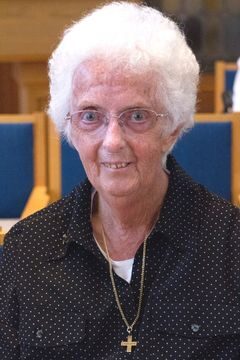 Sister Kathryn was born in Worcester, Mass., the daughter of Lawrence J. and Kathryn A. (Dowd) McGuiggan. She was a graduate of the former Ascension High School in Worcester, and Emmanuel College in Boston. In 1957 after college, she entered the Sisters of Notre Dame de Namur. She later earned a master's degree in English at Boston College.

Sister Kathryn had a long career in education. She was an English teacher at Cardinal Cushing High School in South Boston, Bishop Stang High School in North Dartmouth, and the Academy of Notre Dame in Tyngsboro. From 1973 through 1979, she was the Principal of St. Mary's High School in Lawrence. In 1980, she returned to the Academy of Notre Dame in Tyngsboro as CEO, President and Director of Mission Effectiveness. In 1998, the school's new Athletic Facility was named for Sister Kathryn.

The leadership of Academy of Notre Dame in Tyngboro shared the following about Sister Kathryn in a message sent to the school community:

"Sister Kathryn was an important member of the NDA family and will be sorely missed by all those who had the pleasure of knowing her. …The Academy witnessed great growth during her tenure, including enhanced academics, the addition of athletic teams, and improvements to the campus. When Sister Kathryn came back to NDA in 1980, the only interscholastic sport was basketball. She was an avid sports fan and under her leadership, NDA added numerous varsity, jv, and middle school teams. The Academy also fundraised to build tennis courts and an athletic facility that still bears Sister Kathryn's name, which features a track, soccer field, and softball field. In 2009, Sr. Kathryn was inducted into the Academy’s Athletic Hall of Fame as a “Special Contributor” for all she had done for athletics at NDA.

After her many years in Tyngsboro, Sister Kathryn moved back to Worcester where she volunteered at Notre Dame du Lac and the Notre Dame Long Term Care Center. She also tutored students at the Notre Dame Educational Bridge Center, especially those preparing for their citizenship tests and interviews.

She was in daily contact with her family, and loved their annual summer trips to Wells Beach. She enjoyed spending time in the sun, and would do so in the garden at Notre Dame du Lac. She was also an active member of the Ascension Alumnae. Holy Hour, Rosary and the Mass were important devotions for her. In good weather she would visit Sisters at the Long Term Care Center to visit the Sisters, especially Sister Catherine St. Claire, a dear friend.

Sister Kathryn's mother resided at the Notre Dame Long Term Care Center in the late 1990s, and even after their mother's death, she and her sisters went every Sunday to help with transport to Mass, and treats afterwards for the residents. She and her family were generous supporters all the major events at the Notre Dame Health Care campus.

Sister Kathryn died on Thursday, December 2, 2021 at the Notre Dame Long Term Care Center in Worcester, at age 87 and after 64 years as a Sister of Notre Dame de Namur.

Sister Kathryn leaves a sister Jane M. McGuiggan and her partner William P. Dee, a nephew Michael J. DeSavage and his wife Dawn, two grandnieces, Sophie and Mollie DeSavage, all of Worcester; and her sisters in religion, the Sisters of Notre Dame de Namur. Her sister Mary Ellen DeSavage passed away in 2020.