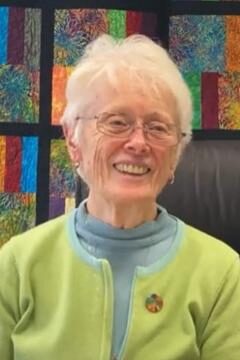 “Teach them what they need to know to live.”
“Better mistakes than paralysis.”

However, after graduating from St. John the Baptist she worked for a year at a Jordan Marsh department store because her mother felt Leonore was too young to make the commitment. But in 1962 she joined the first group of postulants to enter the Congregation at the new novitiate at Ipswich, Mass. In time she earned a bachelor’s degree in history and a master’s in Urban Pastoral Ministry, both from Emmanuel College.

Sister Leonore spent 22 years as an elementary school teacher and administrator in the Boston and the Worcester Diocese, included missions in Worcester, Cambridge, Somerville, Charlestown, and Boston. And in 1976, she served on the Cardinal’s Coordinating Committee. But of all her elementary school experiences, her favorite was to teach first grade and she says has used the skills she learned in that role throughout her adult life.

The range of Sister Leonore’s ministries expanded beyond formal education, though educating others has been fundamental to all her ministries. Some of her activities include service at an urban emergency shelter for women in South Carolina and working with developmentally challenged adults in a workshop setting. She describes volunteering with Special Olympics “a joy in my life.” This combines her experience of growing up with her brother Jack, who had special needs, with her time as a teacher. “Bringing those two things together,” she explains, “and observing how people do things lets you know how to interact, and sometimes you don’t need to do anything—just be there.”

Her current role is Mission Support Director for the Sisters of Notre Dame de Namur worldwide. Sister Leonore describes her work as “the best job in the Congregation,” declaring: “I love my job, because I get the opportunity to tell I-don’t-know-how-many people about the ministry of the Sisters of Notre Dame de Namur all over the world!” She uses her education and communication skills to invite generous men and women to support the SNDdeN Mission of making known the goodness of God.

In addition to her work in development, she has served as a member of the board of directors for various organizations, including Elizabeth Peabody House, the Parent Advisory Committee in Somerville and the Three Sisters Garden Project. She’s also a member of the Ipswich Rotary Club.

Her broad range of ministries have allowed Sister Leonore to encounter many people in in many settings. She marvels at the influence one can have on others’ lives without realizing it, and sometimes in quite unexpected ways. Not long ago, she was approached by a woman who was one of Sister Leonore’s first grade students. Now a mother with a daughter in college, the woman said, “You taught me one of the best things I ever learned, and it has helped me all through my life. It is the greatest ice breaker at any party!” Sister Leonore was surprised to hear that teaching her students to say the alphabet backwards—an educational strategy to help the children learn the letters—made such an impact!

Looking back on her years as an SNDdeN, Sister Leonore views the changes brought by Vatican II as extremely significant, taking the church and Congregation going from a structured, “only one answer” approach to one with more freedom: “Vatican II has allowed us to see what we’ve grown up with and interpret it very differently, but it’s still the same message: We are loved by God and we have the mission to continue to bring the love of God to the people we are with.”

Watch Sister Leonore in the video below as she reflects on her life as a Sister of Notre Dame de Namur.

To make a gift to the Sisters in honor of Sister Leonore's Jubilee, please click here.