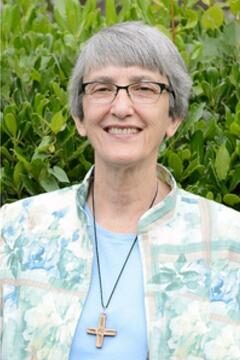 Lorraine Connell grew up in the Boston area, with one younger sister. She was first exposed to the Sisters of Notre Dame de Namur while at student at St. Mark School in Dorchester, Mass. “There was only one lay teacher,” she remembers. “All 23 other classrooms had SNDdeN teachers. I also lived right near the convent and could see the Sisters out for their evening walks talking to each other. I liked them.”

Lorraine attended high school at Girls Latin (now Boston Latin Academy) in Boston, and it was then that she became a faithful fan of the Boston Red Sox baseball team. During those years, she could catch a game at Fenway Park for just $1.25!

In 1970, Lorraine began studies at Emmanuel College and worked part-time at a large insurance agency. She joined the Congregation in 1972 and graduated from Emmanuel in 1974 with a degree in mathematics and certification to teach mathematics and physics at the secondary level.

Sister Lorraine’s first mission was as a high school math teacher at St. Mary’s School in Lynn, Mass. “I was not much older than the senior class that I taught,” she recalls. Other Sisters serving there were wonderful mentors to her as she found her footing: “They kept me going even when I did not really know if I was doing the job well enough.” She is grateful to this day for the support she received from Sister Jeanne MacDonald, Sister Patricia Butler, Sister Maureen Sullivan and several others.

After another assignment to teach math, this time at the junior high level at St. Joseph’s elementary school, Sister Lorraine began studying for a PhD in Economics at the University of Massachusetts, Amherst. While she worked toward her degree, she served as a teaching assistant at UMass and then as an instructor in Economics at Emmanuel College. Completing her doctorate in 1988, her fields of study in economics included economic development, political economy, American economic history and history of economic thought.

For 11 years she taught economics at Emmanuel College, first as an associate professor, then assistant professor. During some of those years at Emmanuel she served as Division Chair of the Division of Social Science, Behavior and Thought. In 1997, Sister Lorraine left Emmanuel College to become a leadership team member for the Sisters’ Boston Province, a position she held for five years.

Sister Lorraine’s experience as an educator was likely the source for what she identifies today as a source of hope: “The sincerity and desires of the young people of the globe and their generous and joyful presence and outreach with others … God continues to act in our lives, we only need to open ourselves to recognize it and to respond generously.”

Her next ministry, and the one that so far has meant the most to Sister Lorraine, was her 20-year service as the General Treasurer of the Congregation. Sister Lorraine explains that it “has brought great satisfaction as we have implemented the Jubilee Fund as a method to supplement the income of the Sisters in the global south; we have continued to meet the needs for electricity, clean water and communications through the Photovoltaic Project, and I was able to have enough time to continue to be on Board of Directors for significant ministries of the Province, especially Notre Dame Health Care Center, Inc. in Worcester and Notre Dame Cristo Rey High School in Methuen.”

In 2022, she accepted another Congregational role, this time as a member of the Congregational Leadership Team (CLT). She lives in Rome and, along with the other four members of the CLT, will travel throughout the Notre Dame world during the six-year term, working to ensure that the SNDdeN mission continues to flourish.

When asked what she would share with someone considering a vocation to religious life, Sister Lorraine offered this inspiring perspective: “There is a tremendous sense of purpose in religious life, the opportunities to grow both individually and as part of a group, and to be part of God's actions among us here on Earth. You will meet the best people on Earth, and you will be called to do what no one else will do. And you will absolutely come to believe that God is Good, All the Time!!”

As she celebrates her 50th year as a SNDdeN, Sister Lorraine says, “I find this is a time to look back and be grateful for the many people who have become part of my life, those with whom I worked and lived. Many have gone on to their eternal reward, but many remain as true community to me, wherever I find myself.”

To make a gift to the Sisters in honor of Sister Lorraine's Jubilee, please click here.