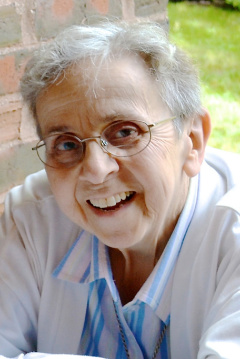 Growing up, Sister Madeline Carrabino's family meant the world to her.  Born Santa L. Carrabino in Brighton, Mass., she was blessed to have three siblings older and one younger, than she. Her brothers Joe and John were  13½ and 8½ years older, and her sister Mary was 11½ older. Younger brother Charlie was born four years after she was. Madeline felt like she had three fathers and two mothers looking out for her!

Her father owned a grocery store close to home called "Charlie's." When Madeline was old enough, she spent many hours in the store helping out her parents. After serving in WWII, Joe and John returned and were a great help to her parents. To this day, Madeline holds happy memories of those good old days.

Madeline attended her K-12 grades at St. Mary School in Cambridge Mass., where the Sisters of Notre Dame de Namur taught. When in the sixth grade her teacher, Sister Clare Callahan, spoke to the class about St. Julie Billiart and her vision at Compiegne where she saw all those who would be her sisters. Sister Clare then said, "I hope she saw me." Madeline never forgot those words, though at age 11 she had no idea what those words meant. She recalls with gratitude those years at St. Mary's and especially being able to have organ lessons with Sister Barbara Marie, a special music teacher. During those years she was inspired by the lives of the Sisters and recalled those words, "I hope she saw me."

After graduation, Madeline went to Boston University for one year and then entered the Sisters of Notre Dame de Namur in Waltham, Mass., on August 1, 1951. Her first mission was at Star of the Sea School in Marblehead, Mass., where she was assigned to teach second grade. Sister Fredrica was a wonderful mentor and teaching was a great experience.

Music and Art were fun—nobody failed. When some children struggled with academic subjects, music and art came to their rescue. Madeline believed there was success somewhere in these subjects for everyone. She remembers in that first year at Christmas time hanging an enlarged drawing of the Nativity. There was Mary, Joseph and of course, Jesus. One little boy stared at the scene and called out, "Sister, Jesus is a big boy." She still chuckles when recalling this story. Madeline remembers the child's name and wonders if he is still making people laugh at his remarks.

"Being an SNDdeN is a blessing for which I am truly grateful to God and to Notre Dame and the Sisters who inspired and encouraged me," says Sister Madeline. "My favorite prayer comes from the hymn, 'O Lord, I Am Not Worthy.' It was the first hymn that Sister Barbara Marie chose for me to play at Mass when I was in
high school. We rarely sang the fourth stanza and it is my favorite prayer:

'Increase my faith dear Jesus, in thy real presence here, and make me feel most deeply that YOU to me are near.'"