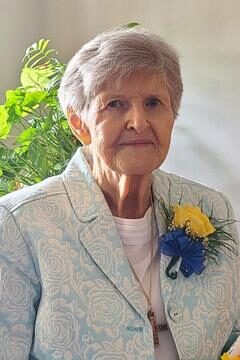 Sister Maggie McCarthy grew up in a happy family with three younger siblings and her parents, Daniel and Mary (Kiley) McCarthy. For 12 years she was educated in Somerville, Mass. by the Sisters of Notre Dame de Namur at St. Joseph School.

All her life she’d wanted to be a nurse and by her last year of high school had selected the hospital where she would receive her training (choosing based on her preferred nurse’s uniform!). But during the spring of her Senior year, Maggie was talking to God and it came to her that she KNEW she was going to be a Sister of Notre Dame de Namur.

She kept her change of plans to herself for some time, but when she told her parents her mother was supportive. Her father was initially far less receptive to the idea: “As a Catholic man from Ireland,” Sister notes, “he couldn’t say no … [but] I was daddy’s little girl and he never thought he was going to lose me like that.” No matter what his reaction, Maggie knew she would be a SNDdeN. “You don’t say ‘no’ to God, for heaven’s sake!” she said with a laugh.

That summer, Maggie worked part-time and spent her earnings having a good time, but it didn’t change her mind about entering the Congregation. She never had any second thoughts; she just knew that’s where she was called to go!

In 1952 she entered the novitiate and took the name Sister Daniel Mary in honor of her parents. She earned a bachelor’s degree in Biology from Emmanuel College in Boston and a master’s in Science Education from the University of Maryland.

Looking back, Sister Maggie feels lucky to have had ministries where she stayed for quite a while. And, she says, “When given choice of ministry, I never had to make the choice myself; I feel that, just like the decision to enter, I was chosen. Someone else knew that it was the right thing—that I had the right gifts and they invited me.”

For 15 years, she taught math and science in Connecticut and Massachusetts. After her father died, she volunteered for the “missions,” which at the time included Latin America, Africa and … Connecticut! Concerns about public safety in that era made her reluctant to be in Africa, but in 1968 the Provincial visited her to tell her that in Kenya there was a need for someone with exactly her gifts. She accepted the offer to become the head of the science and agriculture departments at Eregi Teacher Training College. She says with enthusiasm that “It was just a wonderful ten years. It’s a beautiful country and the students were so eager to learn!” During the time Sister Maggie was there, she was pleased to see a big increase in the percentage of women in her classes. She also enjoyed the supportive community of faculty and staff at Eregi, recalling in particular how they reacted immediately to help get her home when she received the news that her mother was gravely ill.

Health issues of her own brought Sister Maggie back to the U.S. and when her doctors advised her not to return to Africa, she began discerning a new direction for her ministry. She began studying clinical pastoral education and soon found herself working in a hospital—not as a nurse, as she’d imagined in her youth—but ultimately as the director of the department of pastoral care and head of the hospital’s medical ethics committee for many years. Her work also had an educational aspect, as she taught nurses how to help families make decisions for their loved ones who were under the hospital’s care.

“I loved it,” says Sister Maggie, “and I grew into a different set of gifts because science and math and pastoral care come from two different sides of the brain!” During this time, Sister Maggie developed her technical skills and from the late 1990s was also serving as the technology representative for the province.

At age 70 she retired from the hospital and enjoyed a wonderful sabbatical year. Because of her skills, especially those related to technology, Sister Maggie was offered the position of executive director of the Congregational Mission Office (CMO) in Ipswich, Mass., where she was responsible for Congregational communications, development, justice and peace and the Non-Governmental Organization role at the United Nations. “We worked wonderfully together! I loved all of it!” she says. One of her favorite parts of this ministry was to teach computer skills to Sisters from the Southern hemisphere who participated in an internship program at the CMO.

After 11 years, she left that ministry at age 81 and happily moved into Julie House, the Sisters’ retirement community in Connecticut. Now Sister Maggie is enjoying semi-retirement as she contributes to the province technology support circle and helps the residents of Julie House with all their technology needs.

In her life now, she finds joy in community, family and technology. She is happy to live with other Sisters, since during her past several ministries she was living alone. She greatly enjoys her family, especially visiting her youngest brother and his wife (who is like a true sister to her) in Florida and she likes the challenge of learning new things as she helps the Sisters in her community with technology.

To make a gift to the Sisters in honor of Sister Maggie's Jubilee, please click here.