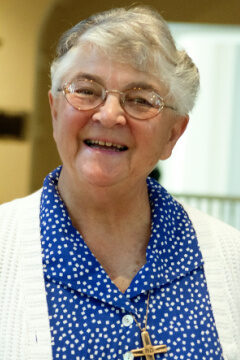 “The Lord has done great things for me.”

I am the youngest of five children born to Anthony and Isabelle (Dwyer) Cavallo. My dad was born in Calabria, Italy, and mom in St. John, Newfoundland, Canada. We say we are Gaelic and Garlic! My parents were hard workers sustained by their deep faith. Perhaps they unknowingly planted the seed for my vocation.

St. Bernard School was in our neighborhood. I was often “helping Sister” and doing errands for those who didn’t drive in those days. Sometimes the Sisters would be at recreation when my friends and I passed by the convent. The Sisters’ joy did not go unnoticed by me. I remember having “instruction” as part of our religion class. This too made an impression on me. These were more reflections rather than doctrine oriented. Studying was not my favorite pastime. This did not stop me from wanting to join a teaching order. I had made friends with the cook, Sister Adelaide, so I knew there were other possibilities. I entered the Sisters of Notre Dame in Waltham, Massachusetts on August 16, 1959.

After my first year as a novice, I was asked if I wanted to try other charges—kitchen, bakery, laundry, sacristy—and I loved it. My ministries continued to be varied over the decades and now after more than 60 years as a Sister of Notre Dame, I feel I have received as much as I have given. I have lived with many wonderful Sisters and learned so much from them. My life experiences are a gift from Notre Dame and the Goodness of God.