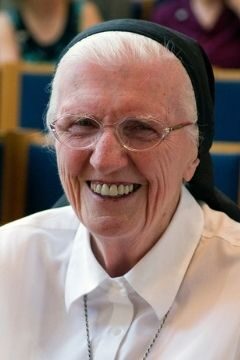 “Better mistakes than paralysis!” is a favorite quote by St. Julie Billiart of Sister Mary Rose Crowley, SNDdeN, who celebrated her 60th Jubilee year in 2021.

Gratitude is her theme song. Sister Mary grew up in Woonsocket, Rhode Island, with her two older brothers and her parents. Her father worked at the Post Office, and her mother taught elementary school. Family life included a Catholic education through all grades.

Her neighborhood was wonderful; a mix of nationalities and religions, and at St. Clare’s High School, Sister Mary Rose was one of four students in her class who did not speak French. Woonsocket drew immigrants from Quebec, Canada, and most families spoke French at home.

Following graduation from high school, Sister Mary Rose attended Emmanuel College in Boston, where she was one of the first-ever residential students on campus.

Sister Magdalen Julie, who oversaw the residence halls at Emmanuel College and who noticed the ‘community’ inclination in Mary Rose, invited her to Notre Dame. Mary Rose says that she responded to her call that she had been considering since grade school, yet heeded her parents’ advice and waited to grow and mature some before joining the SNDdeN community.

After graduating from Emmanuel College, Mary Rose returned to Rhode Island and taught 7th and 8th grade students, until she entered the Sisters of Notre Dame de Namur.

Her first assignment was teaching English at St. Thomas Aquinas High School in New Britain, Conn. Sister Mary Rose remained at St. Thomas Aquinas for 18 years, and loved teaching students there—some of whom came from from first-generation families. She moderated Sodality and coached the Drama club through numerous musicals with Sister Mary Patrice Mahoney. The parents were supportive and involved, which made the experience fruitful for Mary Rose.

Many of the St. Thomas Aquinas students went on to become prominent citizens of New Britain and beyond. It was during these years that Sister Mary Rose realized that her own happy upbringing was not necessarily the norm, but a great gift. Some of the families she encountered through her students were mixed up and had terrible ways of relating, leaving their children suffering. She realized her luck in the family she had: Gratitude!

As a member of the Connecticut Province, Sister Mary Rose was elected to leadership and served in that capacity for 17 years, and attended a few General Chapters. One of the things for which she is grateful is that she was able to meet so many of our Sisters throughout the world.

in her retirement years, Sister Mary Rose continues to share her love for language by serving on the Communications Support Circle of the U.S. East-West province. She has had time to ponder many gifts.

“I am grateful for my family who gave me a great beginning and grateful for friends I’ve known for years. Even if we don’t see each other often, we love and care for and appreciate one another.”

Asked what wisdom might come from the pandemic time of the early 2020s, Mary Rose responded that we had time to think about our values as a church and as a nation that might benefit us all within the challenge of these months. During the time of the pandemic, Sister Mary Rose underwent surgeries and believes that the prayers offered on her behalf have helped her healing a great deal.