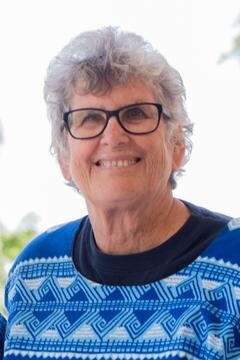 Mary Ellen Howard’s choice to enter the religious life wasn’t entirely supported by her father, who responded to her declaration of vocation with “You’re not the type. Sisters are neat and organized and quiet.” Mary Ellen confesses, “I was none of the above.” But what she was–and continues to be–is a compassionate and fearless woman who was called to serve the poor and support those in the world who have few, if any, advocates.

Sister Mary Ellen always thought of herself as a natural born missionary and her calling was inspired by the work of her aunt, a Sister and architect who built a hospital in Haiti. Sister Mary Ellen wanted to go somewhere and heal people. Her passion for service was ignited by her postulate director, Sister Dolores Julie (Catherine) McGrath, who taught postulants, “Whatever you do, and wherever you go, you will be happy and successful.”

In addition to earning a bachelor of arts degree at College of Notre Dame and a master’s in religious education at Ft. Wright College in Spokane, WA, Sister Mary Ellen spent nine years teaching in Notre Dame schools in California, Hawaii and Washington. But the formative experience of her life began when she was missioned to Africa in 1978. Her calling to go somewhere and help heal people was realized.

Sister Mary Ellen spent the next 30 years in Africa, initially on the shores of Lake Victoria in Kisumu, Kenya, and then in the Kakuma refugee camp in the northwest border of Kenya in what is now South Sudan. In Kisumu she was instrumental in the creation of small Christian communities where the goal was to facilitate Catholic education so that others could carry on the message. During her time in Kisumu, she trained communities in how to assist people living with AIDS. She was also drawn to Kisumu youth and created “Fish Groups.” These groups met to pray and plan actions that could be carried out in the community each week. She also established workshops for young girls to help them improve their self-esteem.

In addition to her work with young people, Sister Mary Ellen established the Donkey Cart Ambulance Service: a response to her observing a woman about to give birth being taken to the hospital (a great distance) by bicycle! Sister trained the men to handle the donkeys, procured a cart, and the community’s first ambulance service was born.

In the mid ’90s, Sister Mary Ellen was missioned to a refugee camp where she worked with the “Lost Boys of Sudan.” This experience prompted her to realize that although she “doesn’t have a fear gene,” it was easy to get discouraged there. It was also in Sudan where her faith was continually energized.

She recalls getting a call one day regarding a man who had dug his own grave, laid down in it, and refused to get out. He had escaped from the Ethiopian army. More than 150 people were gathered around this grave, praying, and screaming for him to get out. Sister Mary Ellen went down into the grave, and talked with him. She pointed to those who had gathered, and said “you see all these people…they are praying for you, they want you to get out.” She said she just relied on her faith, and he climbed out of his grave. Sister Mary Ellen says of this experience: “There are times when you just have to believe in God.”

Sister Mary Ellen’s calling to help people did not stop with her work in Africa. Her service continued in Sacramento, CA, as Outreach Director for Clara’s House, a no-cost medical clinic that serves the homeless and uninsured. Sacramento may not look like the Sudan in terms of need, the poor are indeed underrepresented and Mary Ellen advocated for those in need of medical services. After leaving Sacramento, Sister Mary Ellen served in Zimbabwe for six months.

Since 2014, Sister Mary Ellen has been serving as a Chaplain at the Los Angeles County Jail in Lynwood, CA, working with some of the 2,000 women held there. She has helped many women continue to develop their spiritual lives while imprisoned.

Sister Mary Ellen enjoys reading, walking, and doing healing exercises. “When I joined (the community) in 1960," she says, "I never imagined I would have so very many adventures. I have been so lucky and so blessed.”

She may not have been the most organized, the neatest, nor the quietest when she declared her vocation at age 18. But after 60 years as a Sister of Notre Dame de Namur, Sister Mary Ellen is definitely “the type!”