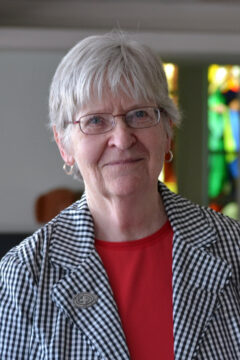 Sister Maureen Griffin was born in Cambridge on April 28, 1933, the daughter of John and Alice (Barry) Griffin.  Maureen Griffin entered the Sisters of Notre Dame de Namur in 1955, took her first vows on February 2, 1958, and final vows on July 28, 1963. She went home to her good God on December 19, 2022. She graduated from the Notre Dame Academy in 1951, received her B.A. from Trinity College in 1955, her M.S. from Simmons College in 1960, her M.A. in English from Middlebury College in 1970 and her M.A. in Fiction from Middlebury College in 1973. She received her Ph.D from Simmons College in 1980. She completed a year of Sabbatical Studies at the School of Applied Theology in Berkeley, CA in 1999.

She served as a Reference Librarian at Emmanuel College from 1958-1962. After that, she taught high school English at CCCH, at NDA in Roxbury, then at NDA in Hingham. She also worked as a school librarian at the Notre Dame Academy in Hingham, St. Mary's in Cambridge, and the Notre Dame Academy in Worcester. He served on the Ecumenical Council in Worcester from 1974-1976 and was the Reference Librarian at Emmanuel College from 1976-1978.

She was also the library director of the Martha's Vineyard Regional High School. She taught at the ND Seishin University in Okayama, Japan and at the Kawasaki University of Medical Welfare in Kurashiki, Japan.