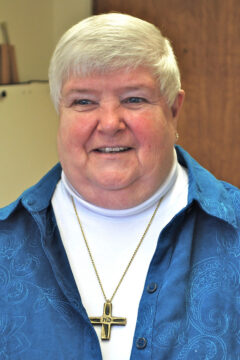 Patricia Butler, SNDdeN—Pat or Patty, as friends and family called her—was born on August 4, 1944 in Boston.

She grew up in the small city of Chelsea, MA about 25 minutes from Boston. Growing up in a mixed Polish, Irish and Italian neighborhood was a gift. Being of Polish and Irish extraction herself, she was quite at home with this rich cultural mix.

For her first 13 years, church, school and neighborhood were the touchstones of Sister Patty’s life. As an eight year old, Sister Patty helped clean vigil lights on Saturday mornings at her parish Church of St. Stanislaus.Sister  Patty felt that the deep quiet in the presence of God prepared the foundation for her vocation.

After Sister Patty finished grammar school, she entered Cardinal Cushing High School in the fall of 1958. Here she met the Sisters of Notre Dame de Namur.

With the influence of these joyous women the seedlings of a religious vocation continued to grow within her and, on August 1, 1963, she entered the Sisters of Notre Dame in Ipswich.

In June of 1969, she completed her first degree work for a BA in English and Teacher Education at Emmanuel College in Boston.

In 1977, she received a degree of Masters of Arts in Teaching the Behavioral Sciences from Bridgewater State College.

From 1979 to 1984, Sister Patty she was a member of the Administrative Team at Cardinal Cushing High School in South Boston.

After 17 years of teaching/administration in the Archdiocese of Boston Schools, Sister Patty ministered in Congregational Service for the next 22 years. At first, she was a member of Project Nicaragua, which was an SNDdeN initiative that had three components:

Subsequently, Sister Patty became the Director of the International Office for Africa and Latin America, and then the Congregational Office of Mission Support until 2005.

It was during these 22 years of Congregational Service that the meaning of Sister Patty’s religious vocation became most clear to her.

Beginning with language school in Bolivia in 1985, Sister Patty's vocation journey crossed four continents. Deeply valuable relationships were made during these years: Her world was blessed by living among and learning from poor people. She also met and worked with many Sisters of Notre Dame de Namur and sisters and priests of other religious congregations worldwide—as well as people of many nations who delighted in partnering with SNDdeNs and other religious congregations to create a world based on justice and inclusivity.

From 2006 to 2018, Sister Patty worked with the Holy Union Sisters, whose US Province Office is located in Milton, Mass. As the Director of Mission Advancement, she was able to share her knowledge and skills with this wonderful group of Sisters founded in Douai, France—just about 2 hours north of Cuvilly, the birthplace of St. Julie Billiart the founder of the Sisters of Notre Dame de Namur.

Today, Sister Patty continues to share her life’s experience with the  U.S. East-West Province of the Sisters of Notre Dame de Namur, especially in the area of Development.