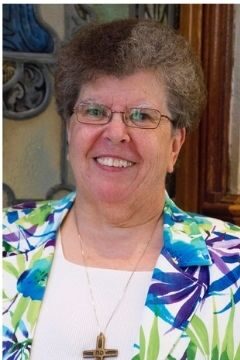 "How good is the good God!"
-St. Julie Billiart

Growing up in Worcester, Mass. with her parents and two siblings, Rosemary remembers that church was always a great part of their life. She first met the Sisters of Notre Dame de Namur when she attended Notre Dame Academy. She joined them after graduation from high school, entering in Waltham, Mass., and was among the last to take the habit in the chapel there.

Her schooling continued at Emmanuel College where Sister Rosemary majored in art. Her favorite form was pen and ink but under Sister Vincent de Paul’s guidance she became a gifted teacher in all art areas and mediums and was able to share this love with her students.

For a couple of decades, Sister Rosemary taught elementary school in the lower grades. She remembers: “Though I did like it all, one great stretch was teaching kindergarten in the morning and art to the rest of the school in the afternoons. Those junior high students were a challenge but they did great work!”

Though the years Sister studied pastoral ministry at Emmanuel College and later at Western Jesuit and Boston College. She then moved on to parish work, which she enjoyed greatly. She found leading communion services and bringing the Eucharist to folks at home such a blessing. Later she became a member of the retreat team at a Passionist Retreat Center. She also found time to tutor adults in English as a Second Language.

Sister Rosemary shared these thoughts on the occasion of her 60 year Jubilee as an SNDdeN: “Life is such a gift and sharing it within community has been one also. Julie’s words, ‘How good is the good God' have been part and parcel of the whole and hopefully will always be, for God is good and has gotten me thus far and I certainly can’t manage without that prayerful thought so ingrained in my being.”