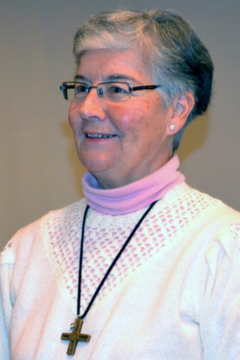 Sister Ginny Scally was educated by the Sisters of Notre Dame in her home parish of St. Gregory’s in Dorchester, Massachusetts. She joined them after graduating from high school. Like most SND’s, her professional life began as a teacher in an elementary setting. Because of her involvement in the parish religious education programs in those early years, she also was influenced by the spiritual needs and hungers of the laity she met. As a result of those encounters, she chose to pursue graduate studies in Theology with an emphasis on Scripture and Spirituality. She was a Pastoral Administrator in priestless parishes (Read "pastoring person!) in the Diocese of Saginaw, Michigan for over 20 years, completed a hospital chaplain's residency and served as the Coordinator of Catholic Pastoral Services at the North Shore Medical Center in Salem, Massachusetts. Ginny was recently appointed one of the three Support Coordinators serving in the Northeast Region of the East West Province and continues to live in Peabody, Massachusetts.